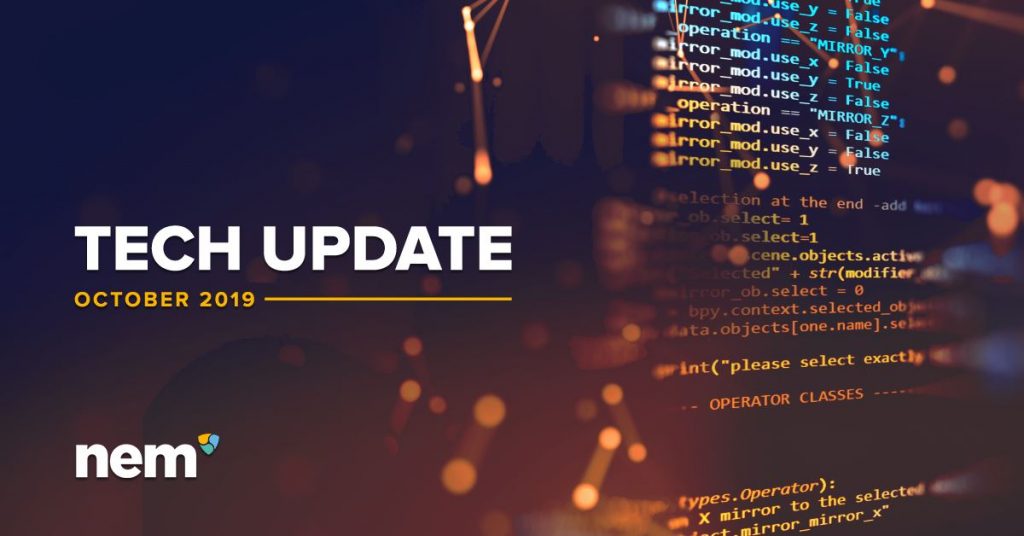 Welcome back to the NEM Foundation Technology Department Update! We are pleased to share with you some of the ongoing discussions and updates in the technology department team.

This latest release adds support for latest compiler versions (CLANG9 and GCC9) as well as upgrades all dependencies of the protocol software. It also introduces a few more standardization changes recommended by the standardization working group around MongoDB collections and configuration changes.

Several fixes have been added as well, including one for a bug in the processing of delegated harvester unlocking messages and another that notifies potential cosignatories once they are added to a multisig.

Adding to these, the protocol now identifies servers by resolved IP instead of only by their public keys, this change requires that every node public key is mapped to a single host at one time. There is also a new monitoring of static nodes that will track any IP change of those servers.

Participate in our #general discussions, we are happy for any feedback!

In parallel to the Testnet, NEM Foundation members have been working on beta version of client applications that can be used on the test network, as found in the following list:

We are glad to announce a period of open beta testing for these software packages. Source code reviews can happen at Github as these projects are all open source.

The NEM Developer Center is the place to learn about Catapult features. NEM Foundation Technology Department members are working on the documentation and technical guides for Catapult on a daily basis.

Guides and documentation that has been added over the course of September include, but are not limited to:

Join our discussions on Slack and contribute to the #sig-docs special interest group.

A new version of the Command Line Interface for Catapult is now available (nem2-cliv0.13.2) with some features add-ons to retrieve restrictions and metadata, this package is still running Elephant 3 compatibility.

Also, the guys over at NEM Studios have been doing sprints to catch up with latest Catapult Fushicho releases . In fact, a new version of the TypeScript SDK v0.14.0 is available at Github which brings features like address restrictions, mosaic restrictions and metadata.

These projects and their source code are managed under the NEMTech Community Project Management Committee .

The Block Explorer can now be used to monitor and read blockchain data available on the test network. It is currently still using the Elephant 3 test network but will be updated to Fushicho test network during this month.

NEM Foundation members have been working on features add-ons including:

As we speak, the team is working on feature add-ons for the Block Explorer and updates can be expected during the month of October!

NEM Foundation members have been working on a beta version of the Desktop Wallet which is compatible with Catapult Fushicho milestone in it’s latest v0.8.1 release.

Moreover, our team has caught up breaking changes introduced with Catapult Elephant3 milestone and is now working to integrate changes from the newly available Catapult Fushicho release . You can expect a new release during the course of this week!

NEM Foundation has been working with Hatio to provide with a Mobile Wallet application that is compatible with Android and iOS. The project has seen some contributions over the course of September and updates are to be expected during the month of October.

The mobile wallet project will provide with basic transactional and account managerial functionalities such as:

More features are being added to the mobile wallet as we speak. We are collaborating with Hatio and coordinating on a weekly basis to push forward this client application that will bring Catapult features onto your Mobile!

NEM Foundation has contributed to the migration committee discussions and process recommendations by describing an action plan and technical definition for the recommended Opt-In Migration of NIS data over to Catapult.

Moreover, during the past month, the migration committee has released a first and second iteration of a community update that you can find on our Forum:

More details will be released with the community in an attempt to be more transparent about the delivered recommendations for the migration.

September has been a month to focus on client applications, on setting up test networks, on initiating test efforts and on discussions and recommendations for the upcoming public network migration of Catapult. The NEM Foundation Technology Department will be giving updates on these topics, also during October.

Getting Started with Catapult