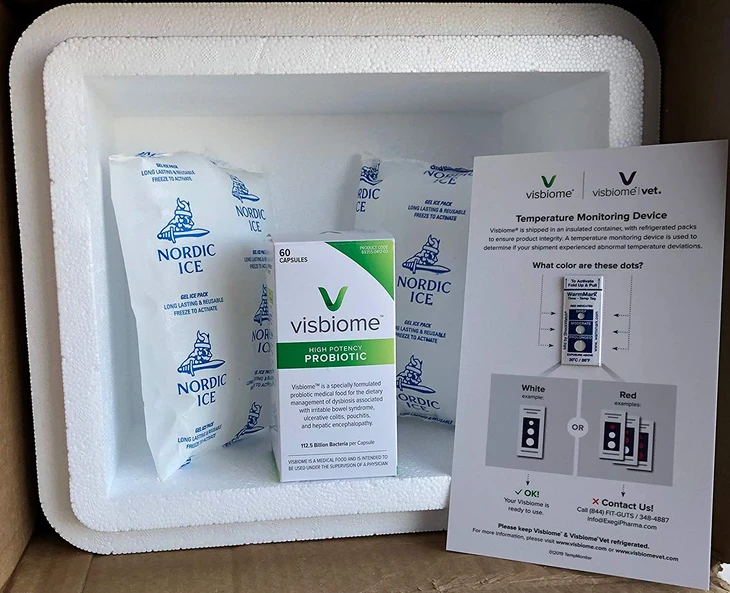 As an Amazon Prime member, I enjoy the benefits of ordering health supplements online. Competitive prices, better quality, and fast delivery are among those benefits. A good quality probiotics can cost $65-$90 per bottle.

However, delivery time and transit conditions (i.e. temperature and humidity) has to be optimum to yield a successful delivery and keep the living organisms viable. Most health supplement companies do not even bother packaging probiotics with dry ice.

Most send them using USPS First class mail that takes 3-5 business days, and a few use 2-day delivery with dry ice. Even then, the package is received with the ice melted and the viability of the therapeutic bacteria is in question. There must be a better way! 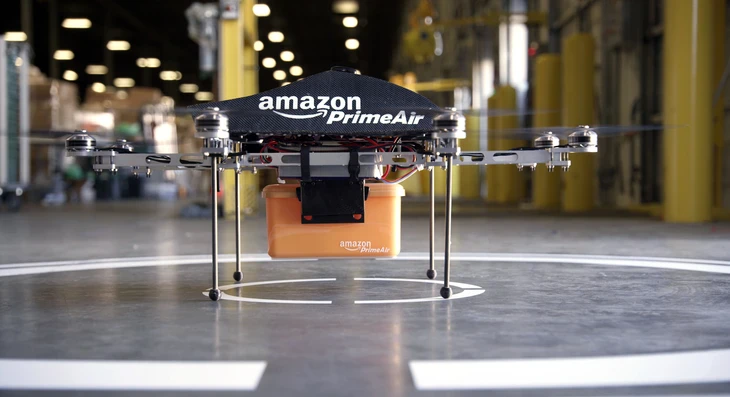 In 2015, Amazon teased a “Prime Air” drone delivery system that would allow packages to be delivered to houses within thirty minutes, and I thought to myself how nice it would be to receive my probiotics on the same day in optimum temperature.

Amazon’s Prime Air deliveries are not happening as promised, but Amazon appears to be fully committed to pursuing them. Now, other companies, including Google and Walgreens, are working to implement drone deliveries.

Project Wing, a GoogleX project, is an autonomous delivery drone service set to start a trial delivering merchandise from participating Walgreens to houses within six miles.
Project Wing opens up a plethora of opportunities, from delivering medical prescriptions to emergency equipment, such as heart defibrillators. Project Wing not only makes shopping more convenient, but it could also potentially save lives.

Drone Delivery Challenges and Blockchain to the Rescue with Axon

Last year, the FAA predicted 452,000 commercial drones in use by 2022, but now it expects the industry to hit that size around the beginning of next year. The FAA predicts the commercial drone market will triple over the next five years, hitting 835,000 aircrafts by 2023.

Commercial drones, which are used for research, pilot training, filming, building inspection and a slew of other professional activities, are typically more expensive and robust than the model aircraft used by hobbyists, but recreational drones are far more numerous, according to the FAA.

Today, officials estimate there are roughly 1.25 million amateur drones in use across the USA, and they expect the market to grow to 1.4 million by 2023.

Without proper auditing, tracking, and security, drone technology could create more harm than good. Currently, each drone manufacturer controls each of its drones via their own proprietary protocols – they are unable to communicate with other drones efficiently and securely. For airspace regulations, this could become an issue with many drones flying at one time.

There is also the chance of a drone’s backend architecture being compromised or having an outage due to its traditional, centralized nature. Drones also need to be able to communicate securely to one another, regardless of brand. Interoperability between devices is a must for the future of IoT – drones included, as they are essentially unmanned, flying computers.

Malicious actors may also try to take advantage of drones through hacking and malware. Drones need to be secure and deemed safe from the perspective of the public eye as well, as it would not bode well for delivery drones to be considered a threat.

In a delivery, there are multiple stakeholders who demand some level of information transparency to protect their interests, namely the sender, recipient, regulatory agencies, and insurance companies.

Using blockchain technology, we can alleviate many of the pain points for drone delivery, and provide solutions for the aforementioned problems and also bring out the true meaning of IoT through a fully distributed, resistive, and fault tolerant solution. Our Axon device, a multipurpose, miniature, and blockchain enabled IoT device, will be responsible for facilitating all drone to blockchain interactions. 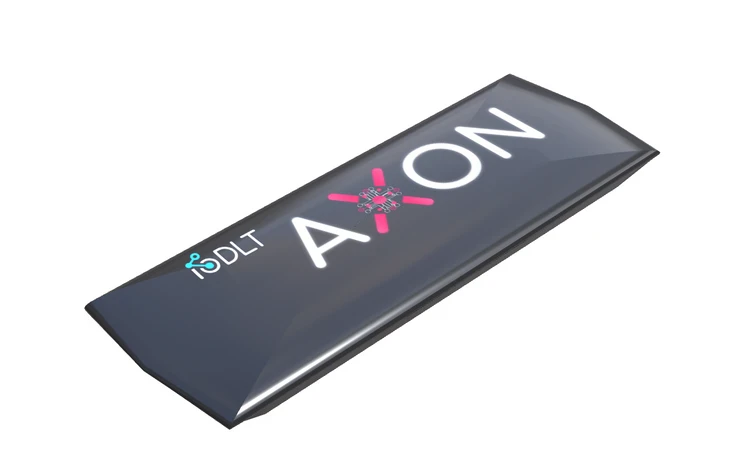 Drones are also increasingly being used for other commercial applications; however, this article will specifically focus on delivery, as it raises many questions with publicly flying, potentially exploitable devices.

Blockchain combines many aspects of a good, backend solution: decentralization, redundancy, fault tolerance, security, and scalability. Besides being architecturally sound, blockchain acts as a verifier of all information that is sent to it.

Through unique cryptographic keys, this allows digital identities, signatures, and ownership to be easily verified and recorded in a ledger-like format. Sensor, analytical, and trip data from drones can also be signed and recorded immutably on the blockchain, leaving a permanent trail of auditability behind.

The Catapult blockchain architecture at a glance.

Why we use NEM’s Catapult blockchain for Axon?

The Catapult blockchain in particular has many built-in features, such as multisignature access, metadata, atomic smart contracts, and special “rules” (Restrictions) that you can assign to accounts on-chain. Catapult can also be used via a standard REST API interface, meaning no mining or staking required for IoT devices, like Axon.

Catapult is a very practical choice of a blockchain that already adapts to industry standards. These features will come to be very useful in defining ownership, access control, peer-to-peer smart contracts, and allow for drones to experience true, and fully secure autonomous functionality without sacrificing its computing resources. 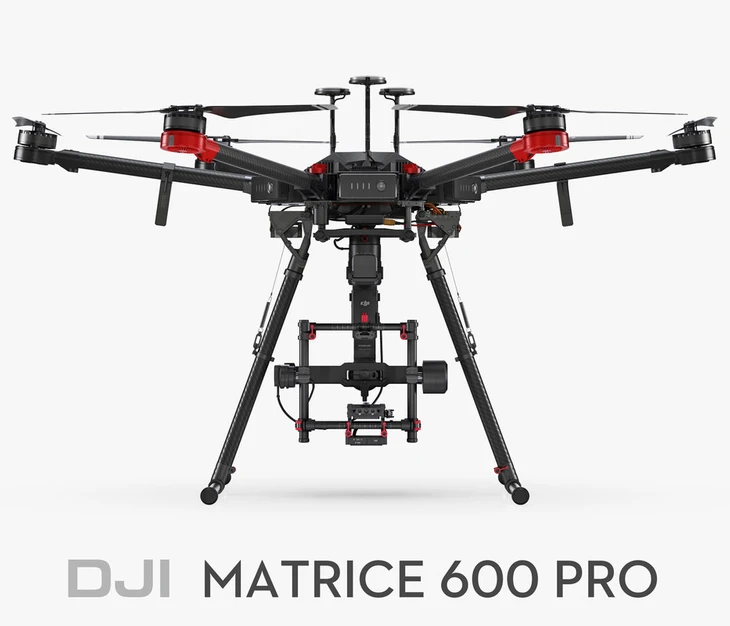 As Axon is already configured to work directly with the blockchain, it simply just needs sensor input from an outside source. In this case, the drone will supply all information to the Axon, including flight telemetry, trip, geo-spacital, and other ToF (Time of Flight) data.

Luckily, DJI creates a lineup of commercial drones that are already able to communicate the Axon directly through standard serial communication. DJI also has a powerful OnBoard SDK, which will essentially give us full access to all of the drone’s capabilities, sensors, and internal flight controller. Combined with the Axon, DJI drones are ready to be configured to be a fully blockchain enabled delivery drone out of the box! 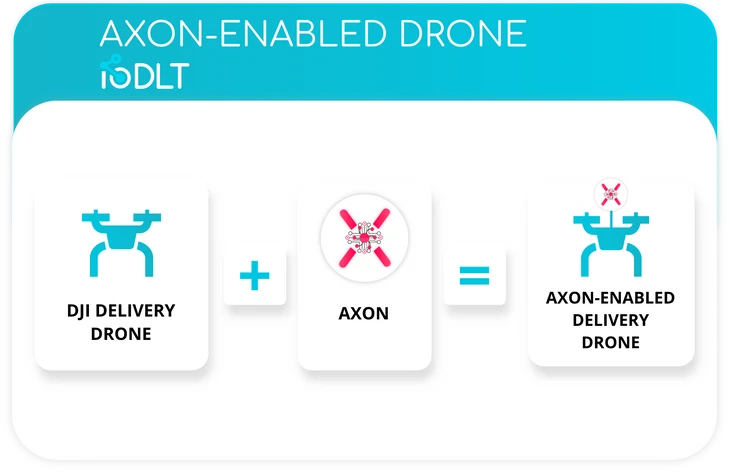 The Axon can easily be integrated with a DJI drone, enabling it to have full blockchain capabilities.

In each delivery, there will be more than just the sender and receiver involved. The drone manufacturing company, sender, receiver, insurance provider, and potentially a regulatory body may need to be able to access drone trip data.

Using Catapult as an aggregator of all drone telemetry data, we can utilize the appropriately named Aggregate transaction type on Catapult to record a chronological record of events on-chain. This record will be sent to all stakeholders in the delivery process. A multi-key encryption scheme, such as Shamir’s secret sharing, can be used for distributed encryption between all authorized parties. 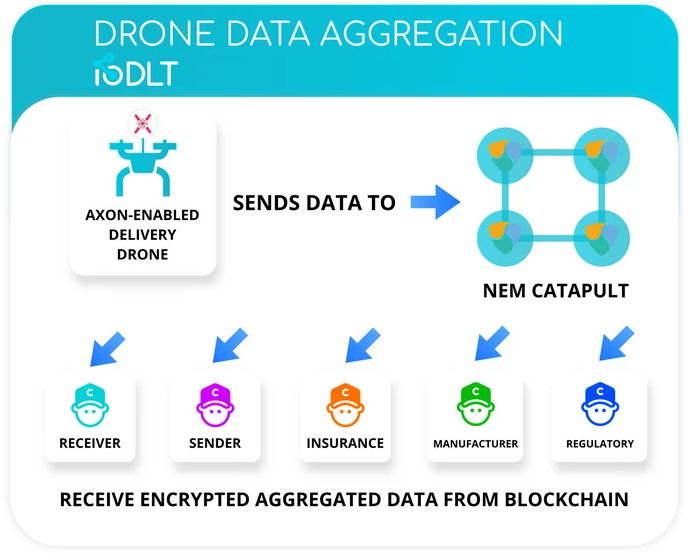 Drones can aggregate key sensor and flight telemetry on the blockchain. This data is encrypted and only available to the appropriate parties.

Access control can be architected in the form of a multisignature relationship between the drone and the business that owns it, allowing only that business to control the drone through the blockchain and public-key cryptography.

If the drone is to be commanded to go to specific GPS coordinates, or any other action, it will first have to receive validation from its owner (or other appropriate figure) on-chain. Using multisignature, this also means that ownership can be transferred from one business to another. 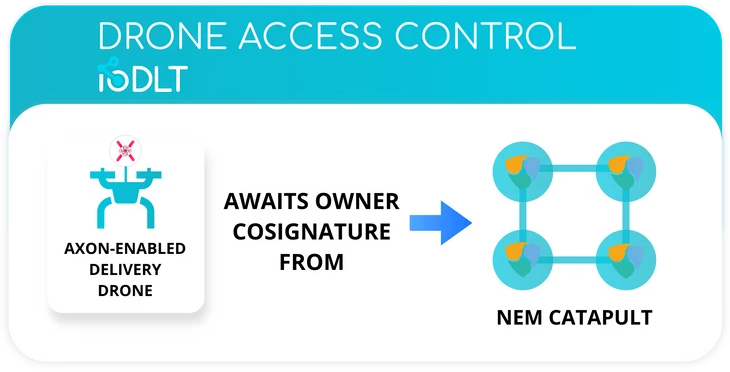 Delivery drones can only perform actions if appropriate permission is given in the form of a signature on-chain.

The blockchain can also serve as a form of distributed communication for drones. Communication with other drones can occur publicly for the purpose of coordination. On Catapult, we can label drones as being within certain zones on-chain via a token.

Drones that own this token will only need to update within their designated area and will check for other drones that may be in the same airspace. Other aircraft’s can also interface with the blockchain to view the airways that are blocked, open, or if any issues have arisen during flight that other aircraft’s need to be aware of. 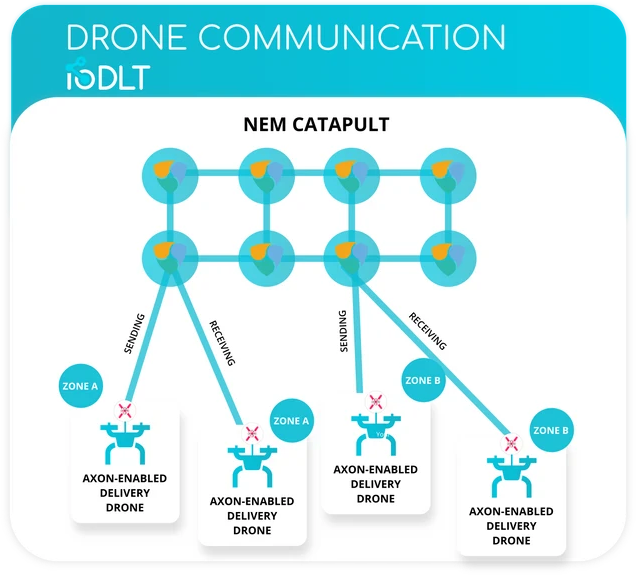 Drones, regardless of their model, brand, or even utility can access a shared pool of flight and airway information on the blockchain. This pool of information is specific to the area in which the drone is currently operating.

With thousands of drones buzzing around, accidents will be inevitable. Insurance companies will need access to information to determine accident reasons and conditions. Delivery drones can record flight telemetry and environmental conditions before a crash or malfunction using Axon’s blackbox tracking solution.

This is also a great use case for decentralized analytics, and for detecting patterns to observe what went wrong, where, and with which type of drone. This valuable data can be made for sale on the blockchain as a decentralized marketplace, where manufacturers and operators can buy and sell drone data using a common token. The data can then be used to improve functionality and economics, and thereby safety, for future drone trips. 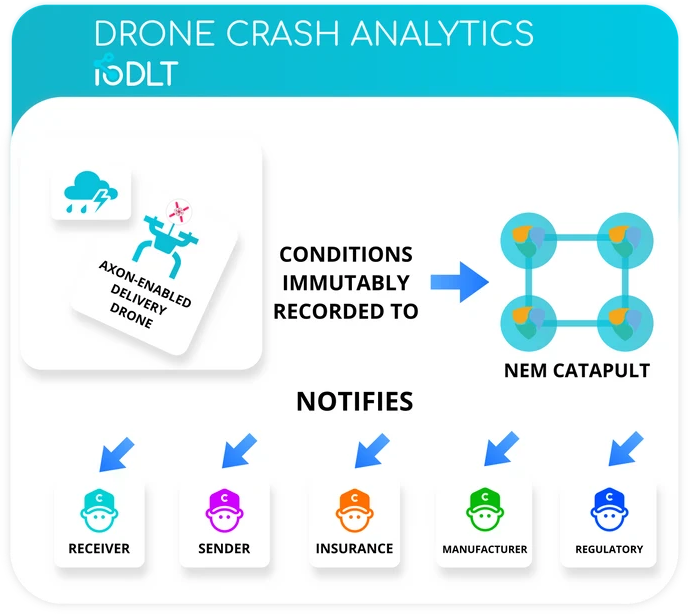 The Axon can also act as a blackbox for the drone. In the event that the drone has an accident, the Axon records its last moments on the blockchain for further analytics.

With each delivery being recorded on-chain, this also opens up possibilities for more of a peer-to-peer approach to drone deliveries. In our example, a fleet of DJI delivery drones could be assigned per city. If one wants to quickly transfer a package from one home to another, they could request a drone to pick-up the package.

Meanwhile, funds to pay for the delivery are put in escrow on the blockchain. The drone knows to deliver to the requested address, then mark the transaction as complete. For higher value packages, the Axon on the drone can even communicate to an Axon inside of a home to open a garage or window for the drone to deliver the goods.

Once a peer-to-peer delivery occurs, funds are released to the drone’s delivery company, and the entire trip was recorded on-chain. All the while, the previous security measures are being followed, and every party is updated every step of the way.

With the trade being settled on the blockchain, it enables a more trustless interaction between the sender, receiver, and delivery service. 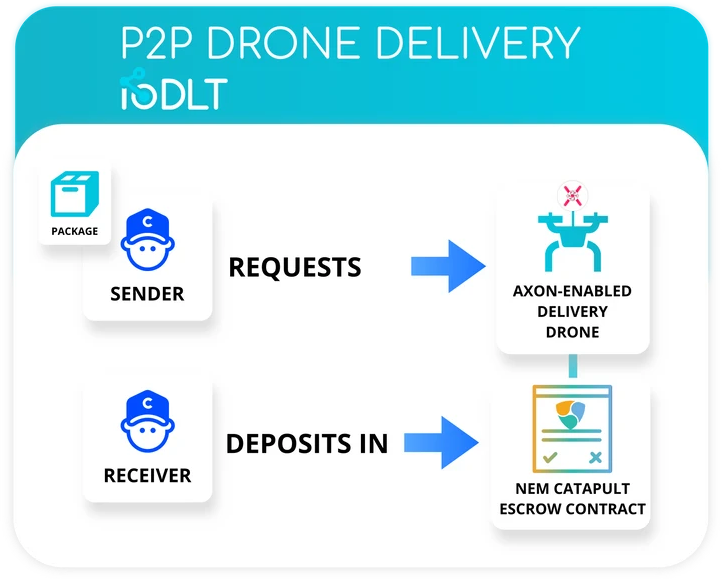 With drone deliveries quickly becoming a reality, the need for security, coordination, and proper logging is a must for the future. Using blockchain can help solve these problems immensely, and combined with IoDLT Axon, will allow any drone to become a more secure flying aircraft.

It’s imperative to be able to secure drones from malicious parties, create a verified trail of auditability, and pave the way for the future through proper communication and protocol standardization among different manufacturers and operators.

Previous articles from this authors: