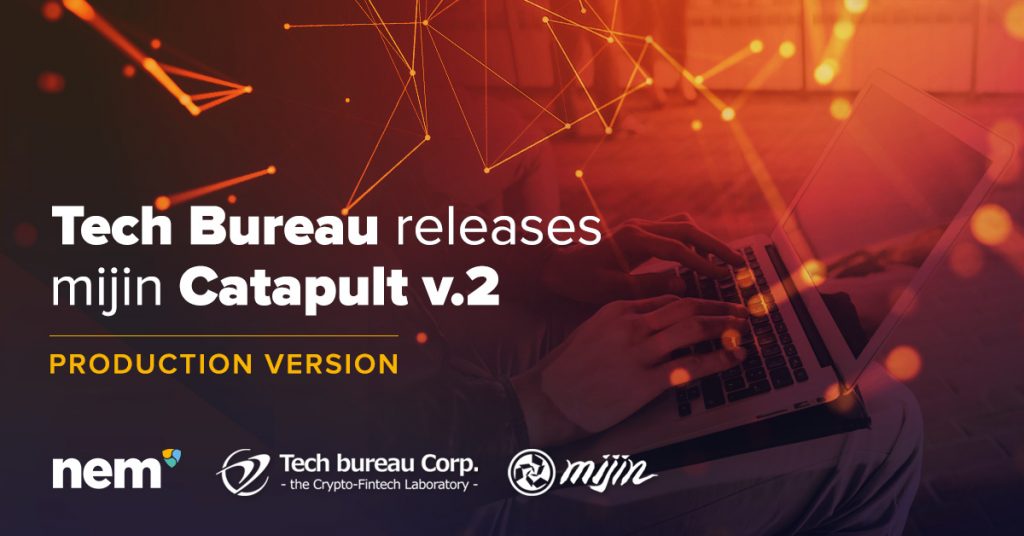 Join the discussion about Mijin Catapult v.2 on the NEM forum!

TOKYO – June 12, 2019 – ​ Today Tech Bureau Holdings, Corp., a fintech and cryptocurrency solutions company, announced that the company has released the latest next-generation core engine “mijin Catapult (v.2)”, a production version of the versatile private blockchain product “​mijin” that is available since September 2015, and has began offering license for enterprise.
Since its release on open source for developers in May 2018, mijin Catapult v.2 has been under ongoing development and testing for around one year.

Compared to the original ​ mijin (v.1), the product has been upgraded in all aspects of functionality, performance and specifications. Also, achieving major advances in addressing both issues of processing speed and scalability, such as enabling token exchanges between different blockchains and batch processing of multiple transactions etc.

Through offering for the production version, the company will not limit the effort to boost the introduction of practical services for blockchain in the enterprise, but it will also further strengthen collaboration with NEM public blockchain in anticipation of a future created by blockchain as asocial infrastructure supporting the world.

*1:A rental space like a web domain to function unique tokens on mijin blockchain
*2:A generic name for the tokens which are issued on mijin blockchain (function to generate unique tokens)
*3:Setting up to maximum of three levels of multi-signature is enabled in order to execute contract due to
the mutual agreement between designated people
*4:A function to facilitate batch processing of multiple transactions
*5:A function that enables to exchange tokens between different blockchains without passing through a third
party

Along with the release of this production version, the company will also hold a free a seminar as a
campaign of prototype application development for proof-of-concept as well as conducting seminars
on location.

Privilege:
1) Prototype application development, and
2) Conducting seminars on location
Fee: Free for both 1) and 2)
Application Period: from June 12, 2019 (Wed) to July 31, 2019 (Wed)
Applicants: Any corporations around Japan who are considering or interested in running a business
implementing mijin Catapult (v.2)
Number of Elected Companies: Three (3) companies each for 1) and 2).
*Elected companies will be determined by lottery in the event of a large number of applicants.
Announcement of the Result of Election: The contact person of the elected company will receive a direct notice by August 15, 2019. (This notification will be the only announcement)
Application Method: Please apply from the URL below.*You can apply for both 1) and 2) at the same time. Each company can apply only once.
https://campaign.mijin.io/mijin01/

“​Mijin” is a software which supports creation of private blockchain environments that can be used inside and/or outside of corporations on the cloud and/or in an in-house data center. It can dramatically reduce costs by replacing conventional databases or accounting systems while contributing to higher security in which prevents from falsification. Additionally, it can be used to implement an environment with practically zero downtime.

“​Mijin” is a general-purpose private blockchain product which uses the “NEM protocol” that is developed together with a “NEM” core developer. As a joint development, not only limiting to financial institutions, but it can be also implemented for electronic money, verification system, registration system, and logistics tracking.

As a team and as a group, we have developed mijin, a private blockchain software. Tech Bureau Holdings, Corp. recently launched a one-stop solution, COMSA, which provides companies with consultation, expertise, and solutions to support their very own ICOs and implementations of blockchain technology into their businesses.

For more information, please visit: ​ www.nem.io
Press contact, ​ NEM.io: NEM@transform.PR / +1-415-595-2030
All product and company names herein may be trademarks of their registered owners.