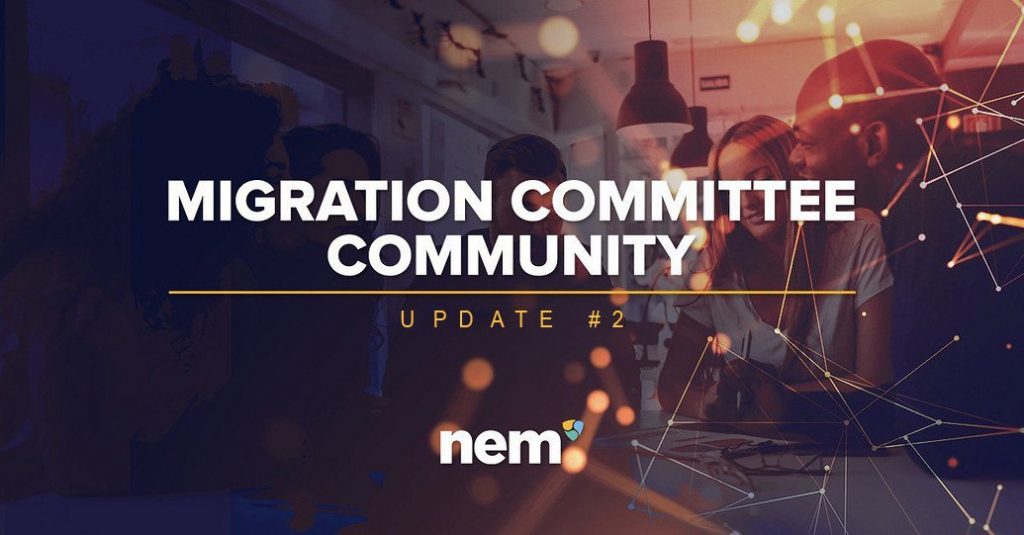 Join the discussion about “Migration Committee Update #2” on the NEM forum!

This is a joint message for our community on behalf of the Catapult Migration Group, comprised of the NEM Foundation, NEM Studios, NEM Ventures and Tech Bureau Holdings.

Over the past four weeks, the committee has filled out and discussed the scope survey off the back of key recommendations that have been made prior. Having minimum requirements for a successful catapult product launch has now enabled the project managers to nail down a better baseline and develop a milestone chart on the current project trajectory. As we progress through discussion on how pre-NEMesis “First Movers” will look like, and what kind of support is needed – the team is reaching an agreement determining the minimum amount of nodes necessary for launch (and other pre-NEMesis considerations).

As more key recommendations are being made since the commencement of the task force, we can now engage with exchanges in a more meaningful way (in regards to migration preparation and listing). In addition to migration team members doing outreach, NEM Foundation has allocated additional resources toward exchange outreach by assigning an exchange task force comprised of Anton Bosenko, Alex Tinsman, Flora Fang, Pedro E. Gutierrez, Jeff McDonald, and Greg Evias to head discussions and prep exchanges for migration. This also includes the support of technical team
Cryptobeliever and Ъ!!!11.

Based on the Scope survey conducted internally and externally, it is agreed that the minimal number of exchanges needed to jump on-board for launch would be 2-5 medium to large exchanges. These 2-5 exchanges will be chosen based on geographic location and XEM volumes traded (a FAQ doc is now being finalised in order to drive these engagements).

In parallel with the exchange engagement plan, the committee is also prioritizing tokenomics and a NIS1 assurance proposal to ensure the viability of the chain post launch in hopes for it to be suitable for all community stakeholders.

With the information and resources available at the present, the current milestone timelines are as follows: 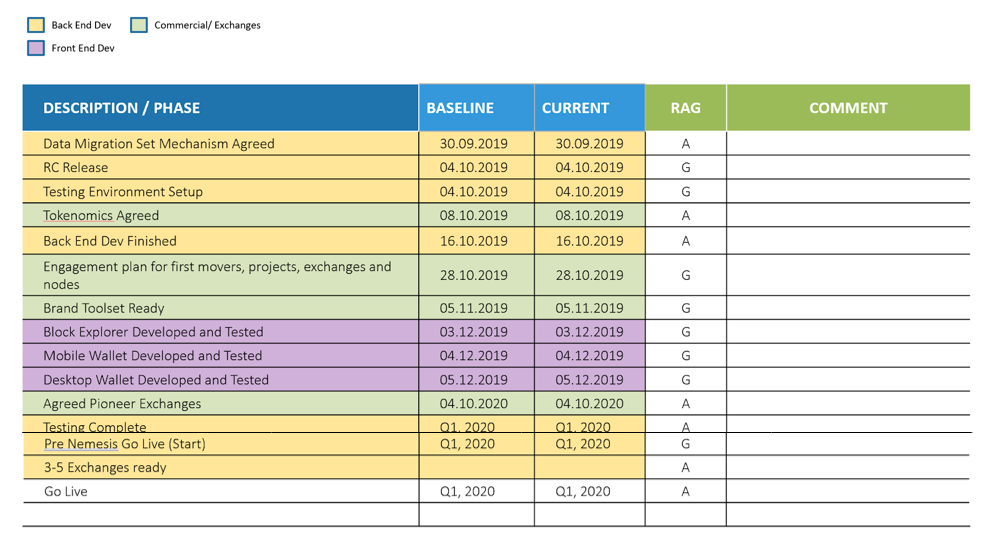 Timelines may change due to external variables

Based on the milestone timelines above, Catapult launch is now targeting Q1 2020. We will keep everyone posted as things progress.

Progress revolving the front end development are as follows:

Block Explorer, Desktop Wallet and Mobile Wallet are all on schedule to be tested and completed in December 2019. An early beta phase has been initiated for some of these projects. You can view the source code of these packages on Github:

Depending on the results of said testing, lead times may extend to ensure quality management.

Questions may arise as to why some of the migration recommendations were made. The following list is an attempt to give more visibility on the side of the community with regards to actual problem solving and decision making:

Work has been progressing well on the Catapult branding and go-to-market strategy, run by the Brand Steering Committee (comprised of Alexandra Tinsman, Nate D’Amico, the new Foundation CMO Lewis Farrell, and David Shaw) who are working with an external branding agency.

Following an extensive audit of the competitor landscape, and looking at inspirational brands as benchmarks, the agency has made significant progress to develop the brand to launch Catapult. A key part of this work has been to establish a ‘brand narrative’, setting out our ambition, what we believe in, our brand proposition, and who our audience is. This provides the groundwork for every communication and expression of a brand, so it has been important to get this right, different and credible. They’ve also shared an in-depth review of our competitors and how they express their brand visually and tonally, which further helps us identify our point of difference and uniqueness. And, they have been developing a shortlist of potential names that we can use for Catapult.

Next steps will be to develop the proposition further, developing visual and verbal examples of our brand that will guide how we communicate across multiple channels and touch points, and through trademark experts, ensuring the appropriate legal due diligence on the brand names we shortlist is done. More details will be forthcoming in future updates.

The migration committee has been strategically engaging with global exchanges with regards to the listing process for Catapult. For perspective, XEM is listed on ~100 exchanges worldwide and our teams have developed strong partnerships with some of these exchanges over the years.

Regarding the process for exchange listings, it’s important to note that most exchanges have stringent listing processes and may require a listing fee. The outreach with exchanges includes digital assets which meet our standards and comply with local laws in the jurisdictions where they are made available for trading.

Due to NDAs and discussions with the exchanges, we cannot share names of exchanges we are engaging with but we can share that exchange listings are targeted by the following criteria:

Thanks for your continued support,

Check out the Migration Committee Update #1