Why Enterprise Blockchains are so different 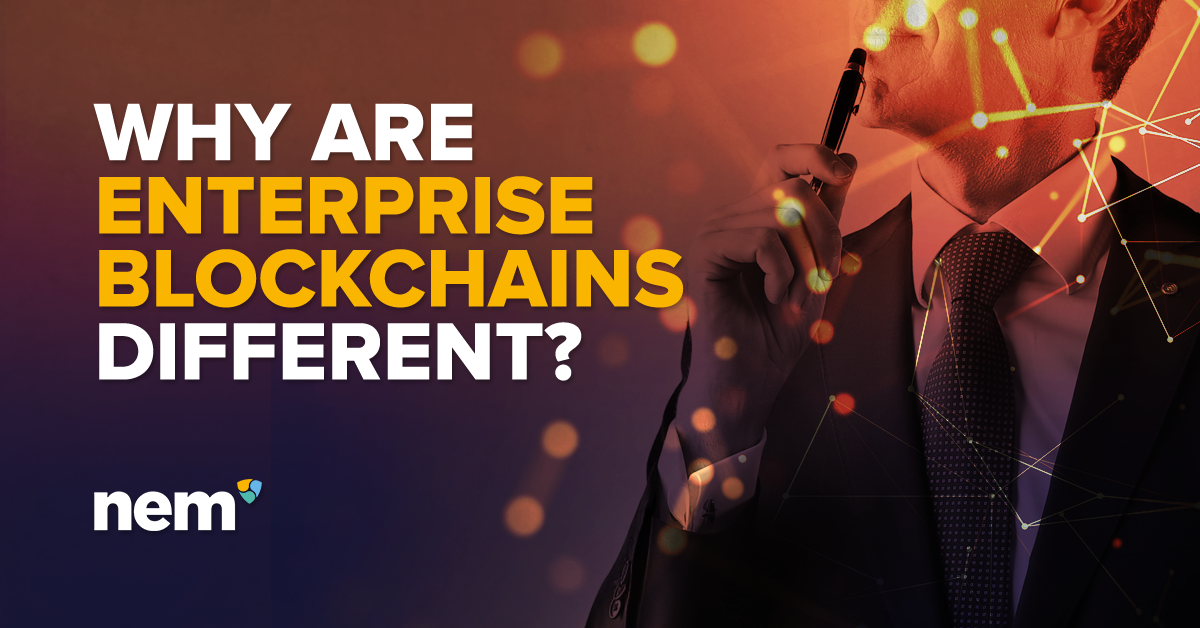 First appeared on the NEM Blog

2019 has been the year of enterprise blockchains, as many banks and enterprises launched their projects. But simultaneously, there has not been a lack of understanding of what makes private and public blockchains different, particularly when it comes to laws and regulations.

We sat down with Nate D’Amico, CTO of the NEM Foundation to learn more about these differences, the current trends and what we should expect shortly.

In an enterprise blockchain, the network is usually considered to be private, or “permissioned”, meaning the organization(s) running the network control who can access and use the network, as well as who gets to run servers that can help power it.

In both cases, the underlying technology is mostly the same, meaning a users who have access to the network will get full transparency to the data allowing for a complete audit of historical data set changes.

As developers on a private blockchain, many challenges are faced in designing a system in a way so that a private enterprise chain will have a high level of robustness and security that will match a regular public blockchain’s reliability. This is in part done at the business development side with making sure that the organization or consortium running an enterprise chain follows best practices to make sure that their private chain will be robust, but also looking into the code for optimizations that best suits an environment where there are far fewer yet far more powerful servers. This means a few servers can do a much higher workload with less redundancy, but in doing so, it is very important that they are always on. Whereas with a public blockchain there are so many servers, that if any or even any ten go down, it doesn’t affect the network at all.

Facebook and Microsoft are both taking part in the blockchain revolution with their Libra and Azure Blockchain services, respectively. Do you expect these projects to increase the adoption of enterprise blockchain solutions?

Microsoft has been quite open towards offering many different blockchain and distributed ledger based solutions. In the future, more and more companies and governments will seek to incorporate blockchain/ledgers as an additional aspect of their existing services. This will help with auditing, transparency, fraud, accountability, and processing times. In some cases using blockchain technology is a fairly radical shift away from how things are normally done, so integrations are happening slowly and initially are mostly additive, but as time goes by more and more importance will be placed on blockchain services that were once periphery and now become core to an organization’s services.At that point gains in speed, performance, costs, transparency, and accountability will be noticed most and the full benefits of blockchain will be realized.

Libra is not necessarily an enterprise blockchain, it’s a public blockchain network where the backers control who can be the validators, with later goals to allow anyone to run servers that power the network, once the project and network mature.

In general, any project that leverages public or private blockchains/distributed ledgers adds energy towards adoption and awareness. I do not think Libra will be a “turning point” per se, but should Facebook and Libra supporters have any level of success, it will introduce a lot of people and organizations to cryptographic assets/tokens.

What does an enterprise blockchain solution bring that makes it better than just a distributed database?

Traditionally distributed databases are often tightly controlled, firewalled, guarded, and the data is not shared. The more important the data, the more these measures increase to prevent security breaches. Blockchain architecture is fundamentally designed differently in that openness, collaboration, and data interactions among many parties actually make the database technology more secure and reliable, not less.

Are enterprise blockchains advantageous because they are less subject to regulations?

Public vs private doesn’t really have anything to do with regulations. What matters is the technology stack, or the assets chosen to be delivered via the ledger. For instance, a company running a private network that powers an unregulated asset offering selling to main street investors is still running afoul against FINRA/SEC.

A grey area for both private and public ledger/blockchain adoption are regulations like GDPR and organizations that errantly choose to persist Personally Identifiable Information and other related data on-chain. Depending on how the network is run, such as globally distributed network, you don’t control where copies of the data reside, and you don’t have any recourse to ‘the right to be forgotten’ as data is inherently immutable and cannot be removed from history.

Since NEM supports both private and public chains, which one do you think will be more used in the
near future?

By the numbers, it’s mixed between organizations that have private ledgers vs deploying solutions on public chains. It can depend on whether you are talking to folks looking to deliver B2C or B2B type solutions, the latter typically looking at private a bit more. In the near term, more projects will probably use private to learn the onboarding process and use that first, adopting public blockchains where appropriate or required.

Our biggest focus for 2020 is the launch of the long-awaited version 2 of the public network. This will lay the foundation for our modern public network and act as the number one validator of the technology stack for both public and private projects.

Besides focusing on the launch of the new public network and increasing adoption for it, we will be working on developer and company adoption and enablement for private deployments and public network adoption. This will be fueled by internal efforts as well as those via our partners and integrator.

About NEM Foundation
The NEM Foundation is registered in Singapore and is operating globally. It was launched to promote NEM’s blockchain technology worldwide, an out-of-the-box enterprise-grade blockchain platform which launched in March 2015. NEM has industry leading blockchain features that include: multisignature account contracts, customizable assets, a naming system, encrypted messaging, and an Eigentrust++ reputation system. It is one of the most well-funded and successful blockchain technology projects in the cryptocurrency industry.