Dave Hodgson speaks on the ethics of venture capital investing and on the future of NEM Ventures.

Blockchain may not be booming the way it was at the end of 2017, but as the industry continues to mature, a growing number of use cases are developing. The question is this: which of them will survive long-term? And how can investors choose projects that are likely to succeed in the long run?

Recently, Finance Magnates spoke to Dave Hodgson, Co-Founder of NEM Ventures, the VC-arm of the NEM ecosystem. NEM (New Economy Movement) is a cryptocurrency that has been designed for transactional and application-layer use in the blockchain economy.

We spoke on the ethics of venture capital funding, trends in blockchain projects, and what kinds of industries blockchain are most likely to appear in first.

What Kinds of Projects Are Worthy of Funding?

Hodgson explained that there are three main things that NEM Ventures examines when it comes to projects that it will potentially fund.

“First and foremost, we’re an investment fund that exists for the benefit of the NEM community…so, we’re looking for something that is going to be commercially viable–this is not just an (effectively) charitable donation. In order for the fund to be sustainable and to have longevity, we need to be able to make financial returns to invest in future projects.”

“That doesn’t need to necessarily be quite as cutthroat as some of the more traditional investment houses might be, so we pride ourselves on being nicer than most VCs seem to be. But it still does need to be commercially viable at the end of the day.”

Our debut investment is getting some good attention. Read more about it here https://t.co/XZbPFragBF

“Nicer” in this case means a couple of things. “We’ll probably give a little bit more coaching to some of the potential proposals if the idea and the team seem good, but perhaps the idea’s not fully-formed.”

Hodgson added that some traditional investment houses (outside of the cryptocurrency space) “will effectively run down a company’s bank balance by making due diligence last longer than it really needs to. So, we try very hard not to engage in those types of behaviors–obviously, if you can run the bank account down, then you can have a much more robust conversation about how much equity you should take for the same amount of capital if, suddenly, the founders are broke.”

“We would prefer to have a partnership with the founding team. That means that they’re more likely to succeed–they stay motivated, they want to stay part of the community. And also because we make financial gains off our budget in XEM as well. So, if the project is successful–if it’s adopted–in theory, the price of XEM goes up anyway, so we make financial gains off that as well, off the investment. So we can be a little more fluid in how we approach that conversation, basically.” 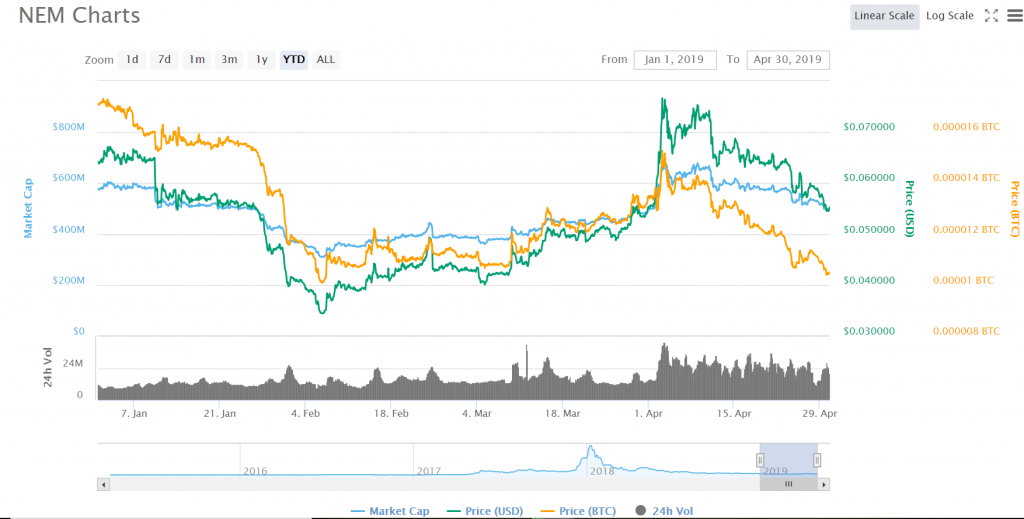 “The next thing we look for is that the idea is a strong idea and that the team can clearly articulate how they’re going to make that idea a reality–basically how they’re going to deliver it, whether they’ve got the credibility as individuals or as a group to do that.” This means checking “whether they’ve done stuff in the past that’s comparable,” or if they haven’t, to see “if they’ve got advisors around.”

“Basically, it’s due diligence,” Hodgson said. The fund needs to “make sure that the guys are going to be able to hit the objectives they’re trying to meet.”

“Finally, we have to assess the benefit the project is going to have to NEM,” Hodgson explained. “So whether that drives adoption, whether the project open-sources its code and commits that to the repositories, [or] whether they make partnerships with lots of other projects that allow them to be more successful on the NEM platform,”

Really, “the concept’s very wide, but we do need to be able to clearly explain what benefit that [each project] brings to the ecosystem so that we can explain to the community why a particular project has been backed over another one.”

Where Does Blockchain Belong?

As the blockchain industry has continued to mature, it’s become clear that blockchain may not be appropriate for as many use cases in as many industries as many people would like to believe. Hodgson said that the question of where blockchain really belongs is one that will play out within “the next five to ten years.”

“But certainly short-term, it feels like it’s going to play out more in fintech, healthcare, energy, logistics, and there are some obvious industries that have some fairly large centralized players in them that either don’t need to be there or could be done more efficiently.”

“So, I could see those industries starting to move quicker,” he continued. “Obviously, fintech is leading the charge, given it’s the one with the most amount of money. But I do think that down the track we will see blockchain generally permeate into various different facets of life–how far that goes, and how much I see it in my own lifetime, I’m still on the fence.”

Personally, Hodgson said that he is “a long way off from being a maximalist and saying that this is going to affect absolutely everything in the world.”

“I happen to live in a bit of the world where half the houses in the village don’t even bother connecting to the internet, so I don’t see those guys engaging with blockchain.”

“Now, if you’re talking about a demographic the likes of central London or central Paris or central Mexico city, obviously you’ve got much different demographics and different types of user bases. I can see [blockchain] permeating much more into the lives of younger people… I would expect to see it in much more industries through their lifetimes.”

“I came through public cloud implementations as an enterprise architect, and there are quite a few parallels. I was around for the dot-com boom at the very start of my career as well,” he said. It was very similar to the culture around blockchain now–”there were a lot of promises made about how this was gonna revolutionize every single aspect of every industry in every bit of life, and it’s simply not true.”

“You don’t really get that kind of wholesale swap-out immediately. That kind of change takes 50, 60, 70 years to come in, really.”

Trends Will Begin to Become More Clear By Year-End

Hodgson said that not enough time has passed to determine whether or not any trends or niches have developed in the kinds of projects that are presented to NEM Ventures for funding.

“It’s probably a little bit too early in the NEM ventures story to know and with any certainty which trends [are starting to form],” he said. “We have proposals across multiple different industries–people who want $50,000, people who want several million; people who are in very early stage pre-revenue, people who are going through Series A.”

In total, “we’ve had about 60 applications now, and I would probably struggle to identify any strong trend at this stage. But I would expect by the end of the year we probably will start to see [trends forming.]”

This was an excerpt. To hear Finance Magnates’ full interview with Dave Hodgson of NEM, click the SoundCloud or YouTube links.