Welcome back to the NEM Foundation Technology Department Update! We are pleased to share with you some of the ongoing discussions and updates in the technology department team. 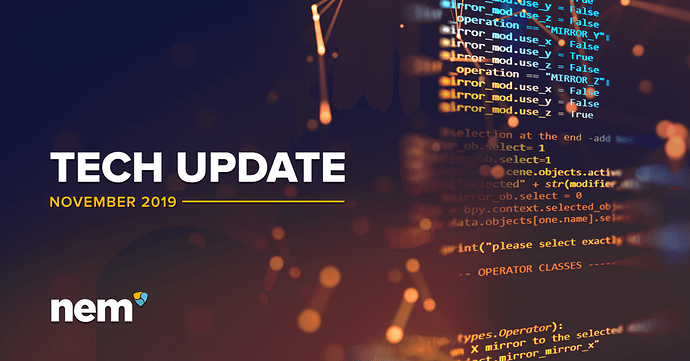 Join the discussion about the November 2019 update on the NEM forums.

The Catapult Fushicho 2 release – which is the first release candidate for Catapult (RC) – introduces optimizations for serialization in re-aligning transaction binary layouts.

Another notable change that dropped with this release is the fact that transactions now always include a network type field, separate from the version field.

With this release, more bugs have also been fixed with following closed GitHub Issues:

It is now time for the NEM Foundation Technology Department and other entities to catch up with core devs again! Client applications should not be affected too much along the way as we are currently maintaining different networks to permit backwards compatibility.

Participate in our #general discussions, we are happy for any feedback!

In parallel to the Testnet, NEM Foundation members have been working on beta version of client applications that can be used on the test network, as found in the following list:

The NEM Developer Center is the place to learn about Catapult features. NEM Foundation Technology Department members are working on the documentation and technical guides for Catapult on a daily basis.

Guides and documentation that have been added over the course of October include, but are not limited to:

Join our discussions on Slack and contribute to the #sig-docs special interest group.

A new version of the Command Line Interface for Catapult is now available (nem2-cliv0.13.4) with the latest software development kit being used and added support for multiple signature schemas (SHA3 and Keccak).

Also, the guys over at NEM Studios have been doing sprints to catch up with latest Catapult Fushicho 2 release. In fact, they are working on a new version of the Software Development Kits and of the REST gateway. Source code can be reviewed at GitHub.

These projects and their source code are managed under the NEMTech Community Project Management Committee.

The Block Explorer can now be used to monitor and read blockchain data available on the test network.

NEM Foundation members have been working on features add ons including:

As we speak, the team is working on feature addons for the Block Explorer to display information about harvesting and harvested blocks and updates can be expected during the month of November!

Moreover, our team is now working to integrate changes from the newly available Catapult Fushicho 2 release. You can expect a compatible release during the course of this month!

NEM Foundation has been working with Hatio to provide with a Mobile Wallet application that is compatible with Android and iOS. The project has seen some contributions over the course of October and updates are to be expected during the month of November.

The mobile wallet project will provide with basic transactional and account managerial functionalities such as:

More features are being added to the mobile wallet as we speak. We are collaborating with Hatio and coordinating on a weekly basis to push forward this client application that will bring Catapult features onto your Mobile!

NEM Foundation has contributed to the migration committee discussions and process recommendations by executing tests for the recommended opt-in migration process.

Moreover, during the past month, the migration committee has released iterations of community updates that you can find on our Forum:

October has been a month to focus on client applications, on setting up test networks, on initiating test efforts and on discussions and recommendations for the upcoming public network migration of Catapult. The NEM Foundation Technology Department will be giving updates on these topics, also during December.

In case you missed it – read about the previous update: