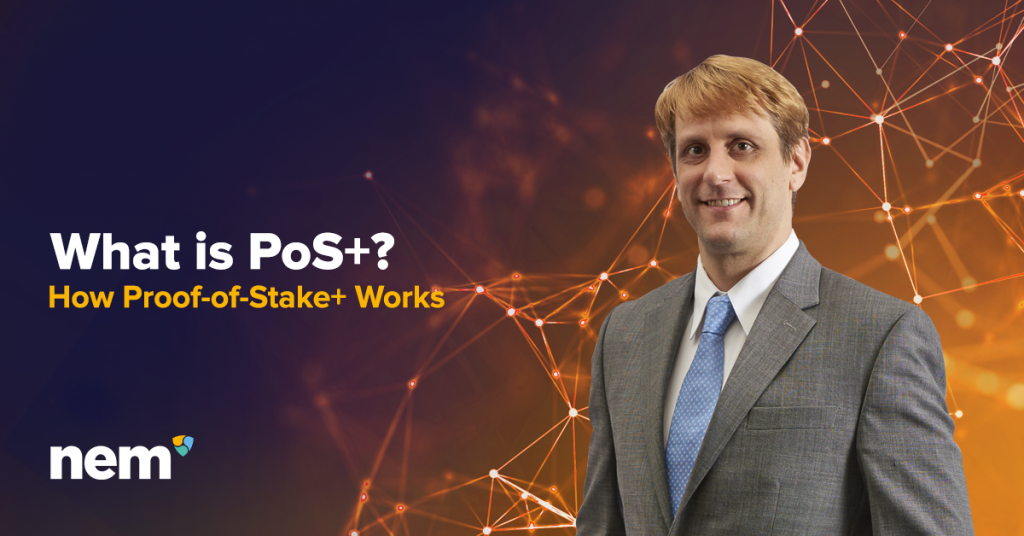 This article about PoS+ first appeared on Medium

Proof of Stake (PoS) is one of the most used consensus algorithms in the blockchain space.

NEM Foundation Council Member & CBO/Co-Founder of LuxTag, Jeff McDonald, has been invited to speak at many events on Blockchain, NEM & Catapult. He always gets asked about PoS+ so we’ve put together a summary of what it is based on his point of view.

PoS+ is made up of three parts. An account can get an increased chance to make a block based upon:

PoS+ is more efficient than PoI

The PoI algorithm used a lot of computational power; this could be a problem in the long run. It was keeping track of multiple different metrics to weight each transaction on the NEM blockchain to determine which accounts were “important” and which were not. This was useful because we know that “important” accounts were contributing to the ecosystem. In the new PoS+ algorithm, activity in the network is still valued and being measured, but now the metrics have been reduced to an outflow of transaction fees paid as we know that “important” accounts are ones making transactions and therefore paying fees. In summary, therefore, it is easier to just track transaction fees instead of other very complicated and math-heavy metrics to figure out which accounts are more important and contributing to the network activity.

Most blockchains have no incentive for running full nodes. This has famously been a problem in Bitcoin, Ethereum, and other blockchains where running a full node is a hobbyist and altruistic endeavor. (Note: Miners get rewarded for producing hash power, not running a full node, so almost all choose not to run a node.)

When NEM was first launched, this problem was originally outsourced to an additional layer, to a program called Supernodes. Supernodes, while being successful at ensuring we had lots of nodes, paid rewards that were not directly a part of the blockchain consensus protocol of PoI. The Supernodes program has been providing an important service to NEM and is also planned to continue in some form in Catapult, though the full details have yet to be finalized. But now with the addition of improvements from PoS+, we are happy to say that those running even a regular node will now be directly rewarded by the system!

And as another added bonus to make running a regular node more attractive, the more delegated harvesters a node collects, the more profitable running a node will be. This incentive comes in two ways. The first is that now node operators can collect a small fee from each block a delegated account makes while harvesting on that node. The second is that the sum of all the delegated harvesters’ importance on a node are aggregated in a way that helps to increase the overall chances of making a block on the node. And again as mentioned before, this all happens by consensus now without delegating to a second layer.

(Note: Delegated harvesting on Catapult is a safe and secure contract for any account with PoS+ to request a running node to make their account create blocks and therefore collect fees in the blocks.)

The best part of PoS+ is that it is all weighted towards smaller accounts. If an account has a very large amount of stake, (think a large exchange) its bonus for outflow of transaction fees and running its own node is not nearly as a big percentage bump as say a small but active account running its own node. This rewards the small-timers who are active in both building on the NEM ecosystem and supporting the network favourably compared to large investors that just stake their coins using delegated harvesting. This helps solve the “rich getting richer” problem that is ever-present in PoS and the “POW doesn’t reward hobbyists for running a full node” problem that is present in most POW coins.

NEM devs have really outdone themselves with this solution, and I think it is something the community can be proud to share.

The NEM Foundation is registered in Singapore and is operating globally. It was launched to promote NEM’s blockchain technology worldwide, an out-of-the-box enterprise-grade blockchain platform which launched in March 2015. NEM has industry leading blockchain features that include: multisignature account contracts, customizable assets, a naming system, encrypted messaging, and an Eigentrust++ reputation system. It is one of the most well-funded and successful blockchain technology projects in the cryptocurrency industry.