NEM announced that The Central Election Commission of Ukraine (CEC – Центральна виборча комісія) had made a first experiment concerning the possible uses of its own blockchain for regional and national elections.

It seems that e-voting is currently on the rise these days; it is now the turn of the buffer state chaired by Petro Poroshenko, Ukraine.

A bit more than a dozen years after the Orange Revolution and four years after the highly controversial Euromaidan event that led former pro-Russian president Viktor Yanukovych to exile in the neighboring country, the crypto universe seems to be moving stealthily towards the Ukrainian government.

No rush… Indeed, a member of the Ukrainian CEC has come forward to investigate the possible use of the blockchain during elections.

On Facebook, CEC employee Oleksandr Stelmakh asked his family and his network of friends to participate in an e-voting test set up through a partnership with the NEM Foundation.

“Thanks to the wonderful team of NEM Ukraine for creating an e-vote test on their blockchain. Those interested in the latter can participate. This vote is taking place within the famous NEM blockchain platform ”

“One of the most basic properties of the blockchain is the impossibility of modifying the information stored there. It is this property in question that we have tried to use to record all voting information at a local scale. ”

Regarding the choice of platform, he notes that:

“It must be taken into account that this experiment takes place in a test environment, itself based on the NEM blockchain. The NEM test tokens used were graciously provided by the representative of the NEM Foundation of Ukraine, Anton Bosenko. The test environment of this e-vote on the blockchain contains 28 nodes”.

From a financial point of view based on the results of the experiment, Oleksandr Stelmakh mentions that a small amount would be necessary to place a node in each police station in order to vote. Its price would be around 1000€ (1135,96 $USD). Nevertheless, the visionary crypto enthousiast pointed out that the test was still in progress and that “polling stations” based on tokens tests were still “open“.

To sum up, The work of this government employee represents the latest effort to apply blockchain to vote counting, and it seems that Stelmakh wants to go further using the plethora of possibilities Blockchain offers. 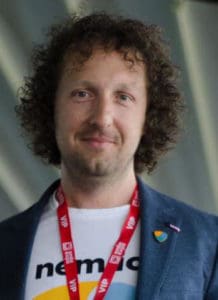