After the overwhelming success of the NemEther airdrop I present the first exclusive interview with the creator of the project himself, Iaminitnow06.

The ingredients of this story include:

Below the article I show you some statistics (provided by the creator of NemEther) from the application form questionnaire. The real gem within this story is how it raised awareness for NEM! If you are new to NEM read an introduction written by me HERE.

But enough of the introduction — lets get straight to the interview!

YZ: Could you tell us a little something about you. How and when did you start out with crypto?

Iminitnow06: Hi, I am a physics and technology lover. I am a physicist with an MSc. degree in Condensed Matter Physics. I love to explore the Laws of Physics that govern our beautiful yet mysterious universe. I started with crypto in April, 2014. Yes, I am not a NEM stake holder.

Coming back to the question, it was actually a physics facts video that I was watching. I don’t recall correctly but the guy talked about Dogecoin while explaining the forces acting on a body when racing on a bobsleigh because they had just sponsored Jamaican Bobsleigh team for the olympics. Being an avid technology lover, I got hooked to the word cryptocurrency. I researched around and read the papers on Bitcoin.

This was such a revolutionary idea of having control on your finances and to do it in a secure, cryptographic and decentralised way. I couldn’t mine Bitcoin so I told myself why not mine some Dogecoin after all I just heard it in a physics video, so it should be famous right!! So I joined a mining pool for Dogecoin and mined around 1 million Dogecoins with my laptop. But after calculating the cost, I just realised that I would not gain much by mining Dogecoin. Haha!! I started looking into other cryptocurrencies, which is where NEM comes in the next question 🙂

When and how did you come across NEM?

After realising my potential with Dogecoin mining I was literally sad. So I looked around Google and found Bitcointalk. And then the real story begins. Qora was a great project during that time, because it had a great developer behind it and it had great discussion going in it’s thread. I decided to join Qora. So I dumped all the dogecoin and brought some Qora.

I heard about NEM in Qora’s thread. I liked the egalitarian distribution and they were trying to solve the problems what NXT (Crypto-hotshot in 2014) had like POS to POI. Proof of Importance (POI) is the algorithm that governs the NEM blockchain. It doesn’t only reward those who have a high stake but you also need to get involved in the project to get the block fees. I saw that there were around 1000 NEMstakes being traded in the NXT AE. I decided to put my life-savings into NEM. So I bought a few Bitcoins, converted them to NXT and bought a few stakes in the NXT AE. I put some of the Bitcoins into other projects too but unfortunately managed to lose them all mostly because they were very bad projects or they were simple scams :P. I even regret selling a few million XEM for these stupid pump and dump scams. But hey, one only learns from experience.

How do you involve yourself with NEM and the NEM community?

After I bought the NEMstakes in NXT AE, I got really involved in NEM Bitcointalk. I started following the thread, participated in discussions. I helped in testing NIS-NCC before NEM was released. Mostly stress testing the test-net by spamming transactions using Python scripts and sending testnet XEMs to other members/accounts.

In Physics we learn C programming, use softwares like Mathematica/origin to do our calculations or simulations. From helping in testing for NEM I got to learn more about Java and Python programming languages too. I felt like a coder but in reality I suck in it 😛 I also did the Hindi language translation for NCC software for which I got 450,000 XEM.

After the launch I introduced some of my friends and people into NEM and crypto in general, who thank me today 🙂 Nowadays I am used to help the odd person in NEM forum/NEM Telegram whenever I have free time. I love the friendliness of the NEM community, everybody is happy to help if you have any problems be it tech-wise, trading or just general crypto awareness.

How did you come up with the idea of creating NemEther?

I learnt about a project called Ethernem in NEM Telegram. It promises to create NEM blockchain on top of Ethereum blockchain which is not possible at all. And they are doing an ICO for that which is clearly a scam. In cryptoland so many people fall to scams like these.

NEM has given so much to me, it was payback time 😛 I setup a Namespace and created a mosaic called NemEther on top of NEM blockchain. I then created a thread in Bitcointalk and sent 100,000 NemEther mosaics to whoever filled a Google form, posted on that thread and was not a sockpuppet. Airdrops were also given to some Telegram users who were/joined at least two of the NEM Telegram channels.

It took me a few hours to setup the accounts and create the Namespace and Mosaics which showcased that NEM is very easy to use. The mosaics also have a levy of 0.00001 XEM which showcase that any business can use the NEM chain suited to their use if they wish to charge customers a small fee to use their services.

It is just “Click, click, click” in NEM blockchain to create a new project. It took me a few hours to set up Bitcointalk thread and create google forms and start the project. Nem recently underwent a new fees hardfork and all the fees were decreased by at least a factor of 10 to 20.In contrast, that scam project haven’t even done their ICO yet while I have finished. This showcases the friendliness of the NEM blockchain 😛

Did you expect the amount of feedback you got?

I never contemplated the overwhelming response that NemEther got. There were more than 800 Bitcointalk accounts and more than 250 Telegram accounts within two days that participated in the airdrop. The amount of people that joined NEM:Red was more than 200 in two days and more came after that. Even as of today I am getting personal messages for the airdrop, such is the response. In short NemEther went viral and I didn’t expect it to be like this. Initially a total of 95 million odd mosaics were created — same as the number of Ethereum tokens present.

But after a while the NemEther Bitcointalk thread and my BTT account was deleted for some unknown reason. I was able to distribute 200 airdrops after weeding out the sockpuppets before the account closure. Rest of the mosaics were sent to the Nemesis address for destruction. And 22 airdrops are kept for future community funding if NemEther gets any value in the future. So a total of only 22.2 million NemEther mosaics exist.

Do you have any future plans with NemEther or do you leave it up to the community?

I think NemEther is the first free NEM mosaic to go viral and it was distributed to 200 unique people. It is a community driven token just like NEM was in the initial stages. If the community comes together then perhaps we can find a good use case. I was told that we can approach the NEM foundation for help if we are able to find a good use case. Maybe we’ll do a rebranding? An exchange? It is up to the community to decide the fate of this awareness project.

When does NemEther hit exchanges?

I actually have no idea about this. It was started as an education project. If it gets any value in the future maybe we can approach exchanges 😛

And last but not least the most important question in crypto: when moon?

Standard crypto question — Whenever it gets any value and people start using it!!

We have a fun notion in NEM Telegram for this — Tomorrow!! 😛 On a serious note I think Catapult will be launched at the end of this year for private chain and for public chain I will take a guess- April, 2018 😛

Some statistics from the airdrop provided by Iminitnow06 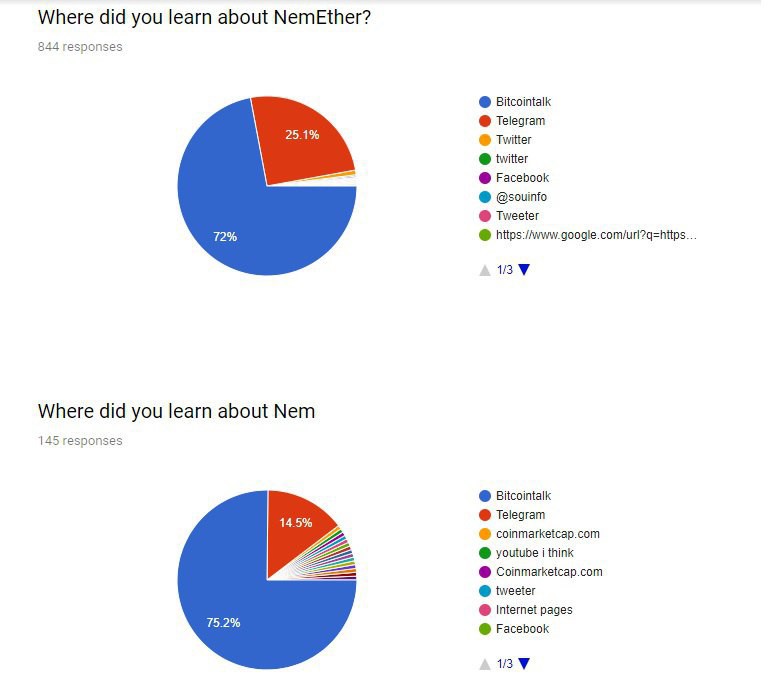 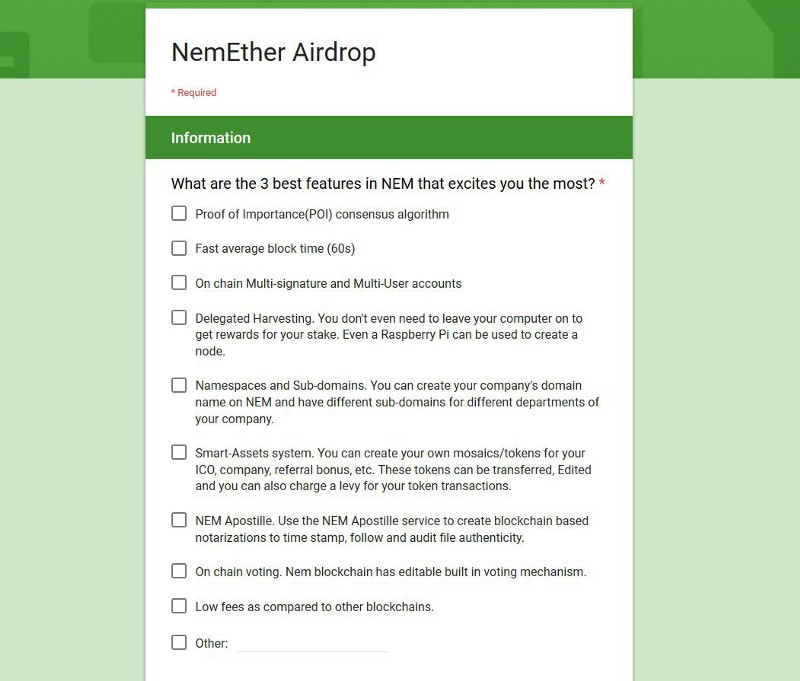 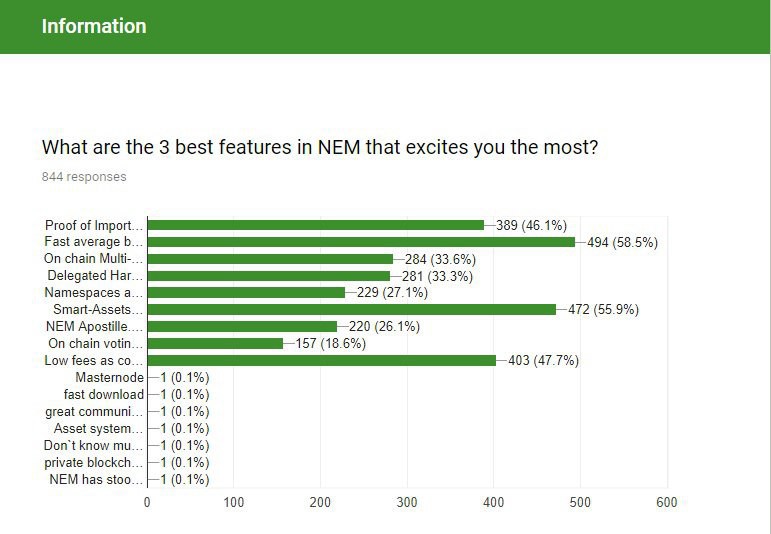 Thank you very much for reading! Don’t forget to leave a comment and share the article.
If you want to join the fantastic NEM community check out the links below:
NemEther Telegram group
NEM Website (nem.io) Very informative and easy to use website by NEM.
NEM Forum Discussions around NEM and its future.
Telegram Groups (Reddit) I can really recommend these for quick answers.
Whitepaper (“Technical Reference”) For the techies and enthusiasts.